By your side to support your pain program

Inadequate pain relief in patients experiencing rheumatoid arthritis or osteoarthritis symptoms is one of the leading unmet needs in rheumatology.
The improved understanding of the disease’s pathophysiology, recent biomarker development and imaging have led to innovative therapies to compare and contrast.

Our dedicated page has been designed for you

Rheumatology is a branch of medicine devoted to the diagnosis and treatment of rheumatic diseases including, among others, immune-mediated disorders of the musculoskeletal system.

Musculoskeletal disorders represent the fourth most common cause of disability in both developed and developing countries. These disorders cause pain in bones, joints muscles, or surrounding structures. Pain can be acute or chronic, focal or diffuse and associated with poorer functional outcomes and poorer quality of life when compared to a range of other chronic conditions. The pathophysiology of musculoskeletal pain is not completely clear and the analgesic repertoire is limited. Osteoarthritis (OA), and to a lesser extent, Rheumatoid Arthritis (RA) are considered to be the most common of the articular disorders and are frequently cited as the leading cause of persistent musculoskeletal pain.

OA is a degenerative process that can affect any joint, but it occurs most often in knees, hips, lower back and neck, small joints of the fingers and the bases of the thumb and big toe. All of the major joint tissues are impacted with damage to the articular cartilage, changes in subchondral and marginal bone, synovitis and capsular thickening that result in structural and functional failure of synovial joints. Progressive joint failure may cause pain, physical disability and psychological distress. The quality of life in the majority of patients with OA is significantly impaired by severe, often intractable, pain. Treatments are intended to address pain-related symptoms, but current analgesic agents such as acetaminophen and non-steroidal anti-inflammatory drugs (NSAIDs) show only partial efficacy. Severe OA pain remains one of the most common reasons for chronic opioid prescriptions.

RA is a chronic systemic inflammatory autoimmune disorder which may affect many tissues and organs (skin, blood vessels, heart, lungs and muscles) but principally attacks the joints (synovium). The exact etiology and pathogenesis of the disease remain uncertain but persistent over-production of pro-inﬂammatory cytokines and abnormal recognition of self-antigens seem to be involved. RA is characterized by a palindromic presentation (symmetrical pattern of affected joints), joint swelling and tenderness, and morning stiffness generally resolved by movement. RA is often associated with severe pain, suffering, and diminished function, thereby detracting from optimal quality of life. The usual drugs used for treating the inflammation of RA are NSAIDs, Disease Modifying Anti-Rheumatic Drugs (DMARDs), biologics including anti-TNF therapies and corticosteroids. Acetaminophen, opiates or antidepressants can be also used to relieve pain.

How we can help you

Prior to moving into the clinic, preclinical investigations are necessary to evidence the efficacy of your compound in the inflammatory pain area.
Within a preclinical pain project, four steps may be of value:

1- In terms of compound profiling, we can document the basics for your lead (dose range, side effects, plasma level, CNS exposure).

2- Using a screening approach, we can guide you in the selection of your candidate.

3- We can leverage a broad panel of disease models mimicking the pathophysiology mechanisms of OA and RA pain to characterize the efficacy of your candidate.

4- We can mitigate the risk associated with clinical development by comparing your candidate versus standard of care agents. 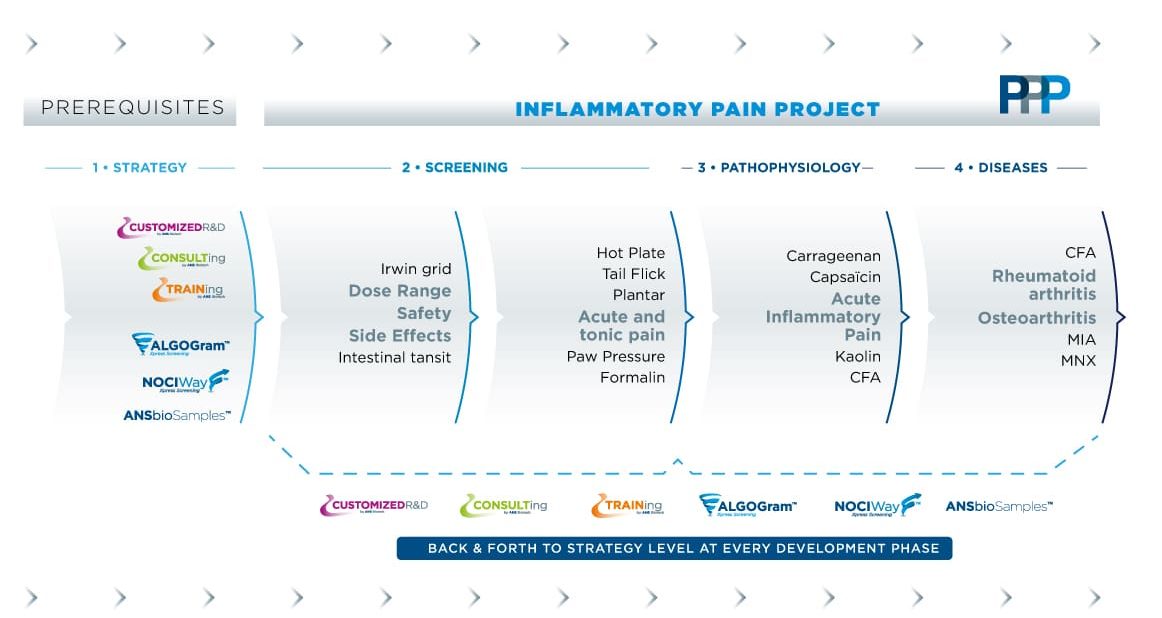 We can identify with you the current status of your pain project and elaborate a plan to move forward.